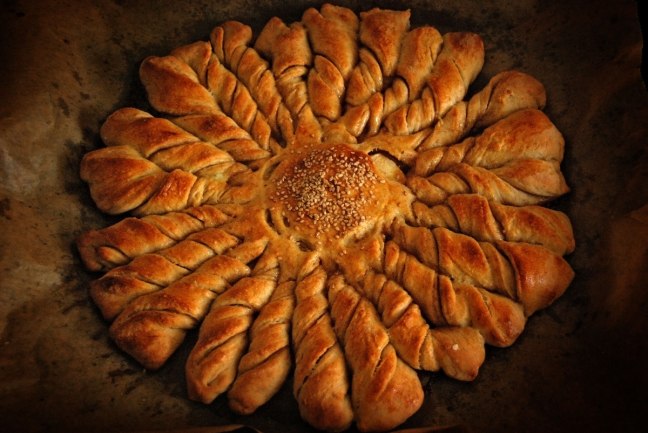 So, usually the things I bake are somewhat messy. Or plain and simple. And I am totally fine with that. I am not the decorating-type. I don’t need overly pretty or styled food, the rustic look works perfectly fine with me. Not that I don’t try making things look pretty once in a while, but mostly I fail. Or it ends up looking messy or somewhat accidental again. I don’t really mind. That’s just how it is. Neat is not my thing. It also is impossible for me to bake and when I am done the kitchen still looks somewhat tidy. Eh-eh. I am close to having to renovate our kitchen after ever bigger food-experiment (Easy stuff works out ok though by now ;))

So anyway, I did see this recipe from Natasa. And it looked so nice and pretty and just once I wanted to see, if I might be able to do it. So I gave it a go. And it actually worked out. M result isn’t as pretty as hers, but for me making something that looks that neat is really rare. And it wasn’t even hard. It is easy to make but looks sort of impressing. Well – it does to me. (I just wish the pictures would have turned out to be a bit better.. Well, can’t be changed now…) Maybe you are used to even more art-like bakery? Anyway, I was happy I finally also could do something pretty. Boy, did I feel like one smart cookie. The saver of the baking world. The one true king of Westeros. Yeah. Whatever. :)

But I am a sweet tooth, so I also did change the recipe just a bit to turn it into a desert-ier version. And this recipe basically is the result. It has a classical cinnamon-sugar taste which I always appreciate. Like this it already is nice, but I personally liked the version with some apple on it even more. It adds a little juiciness and freshness.

So, seriously. Do this. Or Natasas original version. You will feel like a true hero :) 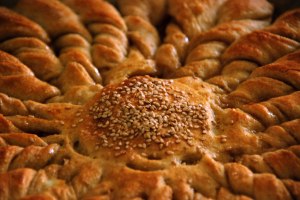 Oh, this recipe will sometimes give you two options. A vegan and a non-vegan one. You can choose your favorite.

For the sourdough start the evening before making the bread. Mix 35g of water with 35g whole wheat flour and one tablespoon of active starter (rye or wheat both work). Cover and set aside for fermentation and prooving.

The next morning, add the almond milk and pistachio oil and the maple syrup or honey to the starter and stir. Then add the flour (in this case I have used normal white flour, but you can also use whole wheat flour) and the salt mix with a wooden spoon until all ingredients come together. Then start kneading the dough with your hands (or kneading machine, if you prefer) for about 10 minutes. It helps working with wet hands.

Form into a ball and place in a clean bowl. Cover with a damp, clean kitchen towel and set aside to rise for about 4 hours.

Just before the dough is ready, prepare your filling: Combine the melted butter or coconut oil, sugar, cinnamon and vanilla powder and mix everything good. Wash and grate one apple. 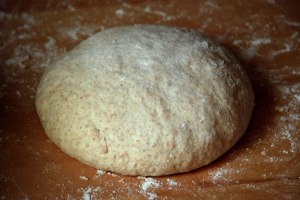 When the dough has grown bigger prepare your working place. Dust your working place with flour. Take out the fermented dough and divide into two equal parts. Set one part aside and roll the other one out into a round shape (about 23-24cm / 9 ½ inch).

Now take the cinnamon-sugar filling and evenly spread it onto the surface, leaving about 1 cm space from the edges. 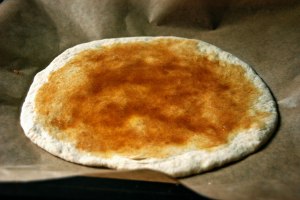 At this point you can sprinkle some grated apple on top. You don’t have to but I would definitely recommend it. Set aside on a baking sheet lined baking tray.

Take out the other part of the dough and roll it out into another round shape with the same size. Cover the first round with the second one and press down at the edges.

Place a glass in the middle of the dough. Then cut divide the dough into four equal parts around the glass. Then divide each quarter into two parts and again into three parts, so you end up with 6 sticks in each quarter. Take each stick and twist it about four times. 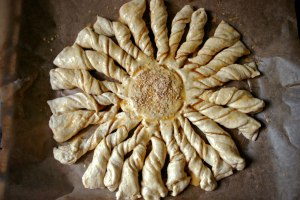 Remove the glass. Apply eggwash or just some water over the whole dough. In the middle where the glass was, sprinkle some sesame seeds (or preferred seeds) on top.

In a 200°C preheated oven, bake the dough for about 30-35 minutes. Let cool slightly before serving.